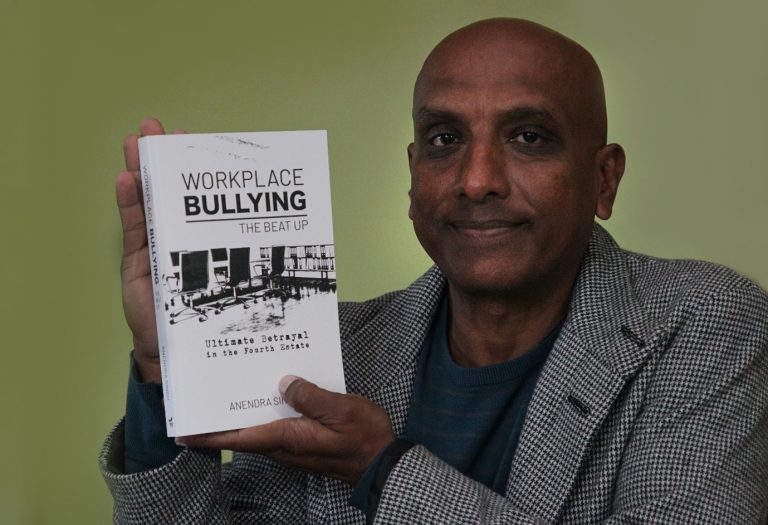 Workplace Bullying – The Beat Up, from multiple award-winning journalist Anendra Singh, is a timely book that sheds light on how rife bullying is in the New Zealand workplace.

“Unfortunately, most of us have experienced some form of bullying or coercion in the workplace,” says Hawke’s Bay scribe Anendra. “That’s why I’m on a crusade to help those in need.”

Workplace bullying can be defined as the repeated and unreasonable behaviour directed towards an employee or a group of workers, which can result in mental or physical harm. Bullying comes in many forms but can be classified as physical, verbal, psychological or social.

Bullying doesn’t only happen between bosses and staff but can also be prevalent among co-workers, contractors, customers and clients.

However, as the book alludes to, it’s not always the bully boss/managers’ fault.

“Workers can also contribute to their own demise but few realise that they have the power to nip it in the bud if they can be transparent,” advises Anendra.

Employers have an obligation to keep a safe working environment. Under Health and Safety legislation, they must take all practical measures to ensure employees’ safety, including protecting them from harmful behaviour.

A 2019 Stats NZ study found around 11 per cent of all Kiwi workers (roughly 300,000 people) had experienced discrimination, harassment or bullying in the past 12 months. The study also discovered more women than men tend to experience workplace bullying. Among ethnic groups, Asians and Māori were victimised more than Pākehā or Pasifika people.

While these numbers are alarming, not much has been done to prevent it help stop the issue, says Anendra. The problem is that it’s rare for employers or perpetrators of bullying to be held accountable.

Consequently, this new book also puts the New Zealand Government under the microscope on what Anendra describes as its reluctance to prosecute any establishments/employers for the such heinous acts.

You can obtain a copy of the book by emailing Anendra at anendravsingh1@gmail.com  or buying it from Aotearoa Books, Wardini (Havelock North), The Plaza (Hastings) or Beattie & Forbes (Napier) bookshops.

With almost four decades as a professional writer and journalist, Anendra is not shy to ask the uncomfortable questions. He has a documented history as an uncompromising writer. In his opinion pieces, he did not let fame or fortune get in the way of unearthing his perception of truth.

It is this uncompromising view of honesty and integrity in journalism that makes his opinion pieces find traction with the readership in New Zealand and abroad.

“Nothing has been more rewarding in my career than the honest feedback from readers, whether it is good, bad or ugly,” he says.

PrevPreviousGet a free helicopter flight when you sell your property with licensed salesperson from Waikato Real Estate, Ksenia.
NextPromote your business wherever you go with a magnetic car sign from New Zealand leading provider of magnetic promotional products – Fridgemagnets.co.nzNext