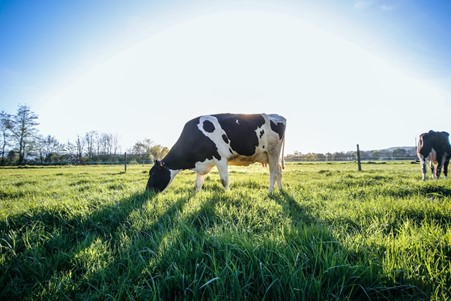 The leaching period is upon us, and there is a lot going on below ground, more than we imagine. This article explores the effect of rate of nitrogen fertiliser on cation and anion leaching under intensively grazed dairy pasture which can have far reaching effects on the way we farm from Hamilton-based Soil Scientist Dr Gordon Rajendram (PhD).

In New Zealand, there have been limited studies on the topic of leaching of anions and cations in intensive New Zealand dairy farming systems. However, it is an important topic, as it is vital to the soil health and long-term effects on New Zealand farms.

Leaching is the loss of water-soluble plant nutrients from the soil, due to rain and irrigation. Plant essential nutrients exist as anions and cations. Anions are elements or molecules that in their natural state have a negative (-) charge. Cations are ones that have a positive (+) charge in their natural state. Generally, soil is negatively charged and repels negative ions (anions), which are easily leached by rainwater and irrigation drainage.  Negative ions which are leached take a positive ion with it, it is part of nature.

“The leaching of anions and cations is conditional on various factors including the amounts and form of nutrients applied in fertiliser, stocking rate, rainfall & therefore drainage, soil type and extent of previous leaching,” says the Soil Scientist Dr Gordon Rajendram

The increased use of nitrogen fertiliser on dairy farms for the last few decades, has led to the growing concern about the effect on nitrate leaching to groundwater.

A study in the mid 1990’s by Rajendram and Stewart Ledgard and other research’s at AgResearch set out to determine the amounts of Ca, Mg, Na, K, nitrate-N, sulphate-S, Cl and inorganic P leached from intensively grazed dairy pasture at three sites (Waikato, Taranaki & Southland) over a five-year period in the absence of N. In addition, nutrient leaching was determined in dairy farmlets at the three sites receiving 0, 200 or 400 kg N/ha/year.

“The quantities of cations and anions leached from the farmlets getting no nitrogen fertiliser represented a significant removal of these nutrients from the system, particularly under high drainage,” comments Gordon. Where no N was applied, approximately $240 of fertiliser was applied above ground, but $160 of nutrients was lost below the root zone in drainage. Once the N applied was increased to 400 kg N/ha/yr, the value of nutrients lost below the root zone jumped to $250/ha/year.

Another negative impact was, clover N fixation decreased from 180  to 0 kg/N/year when nitrogen application rates increased from zero N applied to 400 kg N applied per hectare per year.

Leaching losses for cations and anions were similar between the different non-N-fertilised farmlets even though there were differences in soil drainage characteristics, region, and management practices.

This study showed that high-level leaching losses of Ca, Mg, Na, nitrate-N, sulphate-S and Cl occurred from intensively grazed pasture and that heightened farming intensity, through the use of N fertiliser, increased the losses of Ca and nitrate-N.

Soil Magnesium levels were decreasing on farms in the 1980’s and 90’s. This study showed the reason why this was the case.  Approximately 30 kg per hectare of magnesium was being leached every year and not replaced in fertiliser or via rainfall.

“These results have significant consequences to the sustainability of these systems, the potential for increase in incidence of hypocalcaemia and hypomagnesaemia in animals, and the requirements for nutrient inputs in fertilisers,” advises Gordon.  The research findings were included into the Overseer nutrient model. When farmers are required to determine their N leaching index, cations and anions leached is also generated by Overseer as part of the output.

Waikato based Soil Scientist Gordon Rajendram is committed to helping New Zealand farmers get the most out of their soil so that their farm can work more proficiently, be sustainable while increasing farm profitability. Gordon is one of the leading voices in soil fertility.

The award-winning luxury South Island motel, Century Park Motor Lodge is the perfect place to base yourself for the upcoming winter of sport.