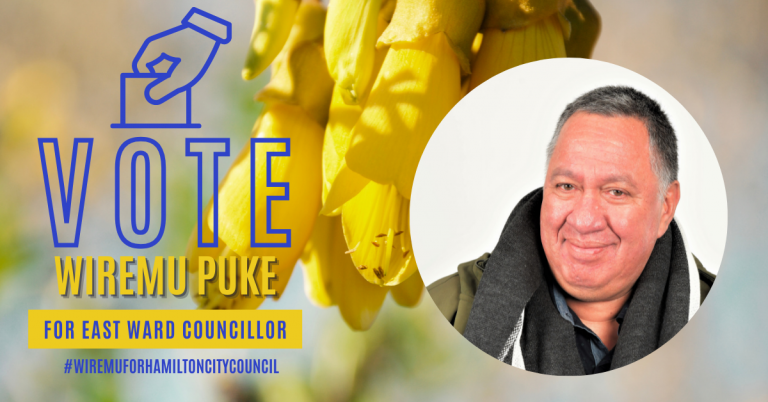 Wiremu is standing for Hamilton East Ward to bring more successful projects to the table that will benefit Hamilton on a cultural basis. Wiremu has a great track record of projects that have had a big influence on Hamilton.

Wiremu is responsible for the creation of the Te Parapara garden located in the one of its kind Hamilton Gardens, the only pre-European Maori garden in the world. The Whatanoa gateway at the FMG Stadium Waikato is also there thanks to Wiremu Puke.

Such projects bring cultural significance to Hamilton. Not only does this benefit tourism and communities but most importantly it gives Hamilton identity.

Wiremu is not only here to give Hamilton identity and boost the city, but community relationships are also very close to his heart. Academic and governance work under his belt he brings a lot to the table.

The next generation is the future of our city. Wiremu already has great influence in schools around the region and taking the place of Hamilton East Ward will only bring more awards for them. Integrating Maori culture in the young generations will always be important not only for the identity of Hamilton itself but also people growing up here.

It is important to have such a team leader play that role, but Wiremu knows that as a team leader you also need to be a team player. At the end of the day the people are the mana of this city.

We have Auckland Anniversary in Hamilton, why not have a celebrated day for Hamilton? Wiremu pushes the idea ‘Bloom of the Kowhai’. Our own anniversary that celebrates the yellow and golden boulevard along the Waikato River.

Bloom of the Kowhai will bring people together during the month of September, an event that could rival the cherry blossom festival of Japan. Not only will this bring Hamilton closer together, but tourism will boost the economy.

We are Hamilton together, let Wiremu Puke give us that identity. Find out more on Wiremu Puke at: https://www.yourcityelections.co.nz/candidate/wiremu-puke/78