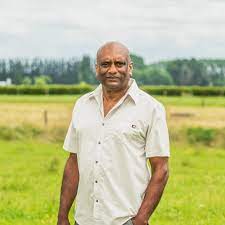 When a young Gordon Rajendram took a casual summer job at Ruakura Research Centre, no-one involved had any inkling that he would go on to be a research trailblazer and a leading expert around soil fertility.

Although that summer job was undertaken while studying for his first degree at Waikato University – Ruakura Reserarch Centre went on to play a pivotal role in Gordon’s career and he ended up working at the prestigious Research Centre for 22 years.

Now with BSc, MSc and a PhD to his name, Dr Gordon Rajendram is widely regarded as a pioneer in laboratory measurement techniques for chemical, biological and physical properties in materials (aka he specialises in soil fertility).

He holds a number of patents (five to be exact) and along the way has been nominated by AgResearch for Kudos Awards: Scientist of the Year in 2008 for work done on the soil sulphur test and its agronomic advice. He was also nominated by Ministry of Science and Innovation for Kudos Awards: Science Entrepreneur of the Year in 2010 for his work done on precision farming.

And now in the next phase of continued development, Gordon has recently launched his new website (gordonrajendramsoilscientist.co.nz): dedicated to helping farmers get the most out of their soil, and providing soil knowledge to help farms work more efficiently and sustainably, while improving profitability.

“This website has been a long time coming and I am excited to finally share it,” he says.

Information shared on the website also highlights the importance of getting soil tested and why this needs to be done regularly.

“Soil testing can help you more effectively use plant nutrients and reduce the leaching or runoff into waterways,” says Gordon.

Helping to demystify the science around soil, Gordon is driven to help farmers on their journey to getting an accurate read on what elements are needed in their soil.

“Soil and herbage testing give accurate data about the mineral imbalances that may be affecting the health of your crops or livestock. Soil testing allows you to make the best and most informed, data-based decisions for their farm, resulting in healthier land and stock as well as making a difference on your bottom line,” advises Gordon.

Having moved to New Zealand when he was nine years old, Gordon’s introduction to rural living came via time spent on the two farms at St Peter’s School in Cambridge, where his father taught.

“In fact, I pulled out ragwort on one of those farms when I was about nine years old – and got paid for it!”

Following that early introduction to farm labour, Gordon went on to experience other elements of rural life, involved in haymaking and milking cows on a Taupiri farm before heading to university to pursue his studies.

Any time not dedicated to researching knowledge, was spent playing or watching a variety of sports, from rugby and league to cricket and tennis.

While Gordon has prolifically achieved throughout his career, his soil fertility research has by no means made him a household name, even though the impact of his research has been far reaching in farming, horticultural and fertiliser industries. Much of his work has been included in Overseer.

Unfortunately, minimal government funding has drastically reduced research work being carried out, but Gordon continues his commitment to sharing his knowledge and insights.

A member of New Zealand Society of Soil Science and of New Zealand Grasslands Society, he has more than 70 publications to his name (mainly achieved while working at MAF and its predecessor AgResearch, Ruakura Research Centre in Hamilton).

Among the many areas his research has impacted is his study into Soil Nitrogen (N) and Field Calibration. In 2008, he developed a field calibrated pastoral soil N test for New Zealand which would benefit NZ agriculture massively.

Revolving around the strategic use of N fertiliser on areas of farm based on the N status (Organic –N and the easily mineralised N fraction) of the soil; this IP was brought by Ballance Agri nutrients as part of an $18 Million funding deal with MSI and AgResearch. It was initially called ‘N Guru’ but has been renamed as ‘Pasture planner’.

Much of Gordon’s research and knowledge can be found on his website and Farm Trader welcomes him to its team of regular columnists also.

PrevPreviousSix things you should know before filing your EOY tax from the team at Drumm Nevatt & Associates
NextTogether we got this, Thru Thicc and ThinnNext